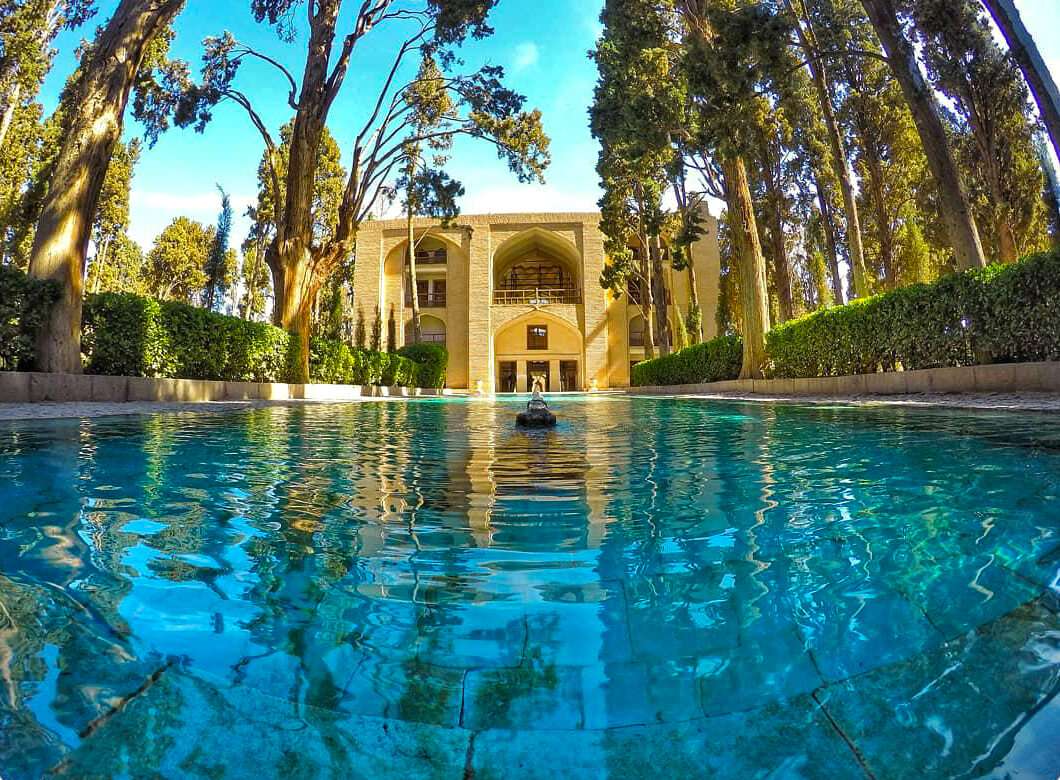 Wandering in the leafy 16th century garden in the suburb of Kashan. The garden is one of the nine Unesco-recognized Persian gardens.

Photos of the Fin Garden 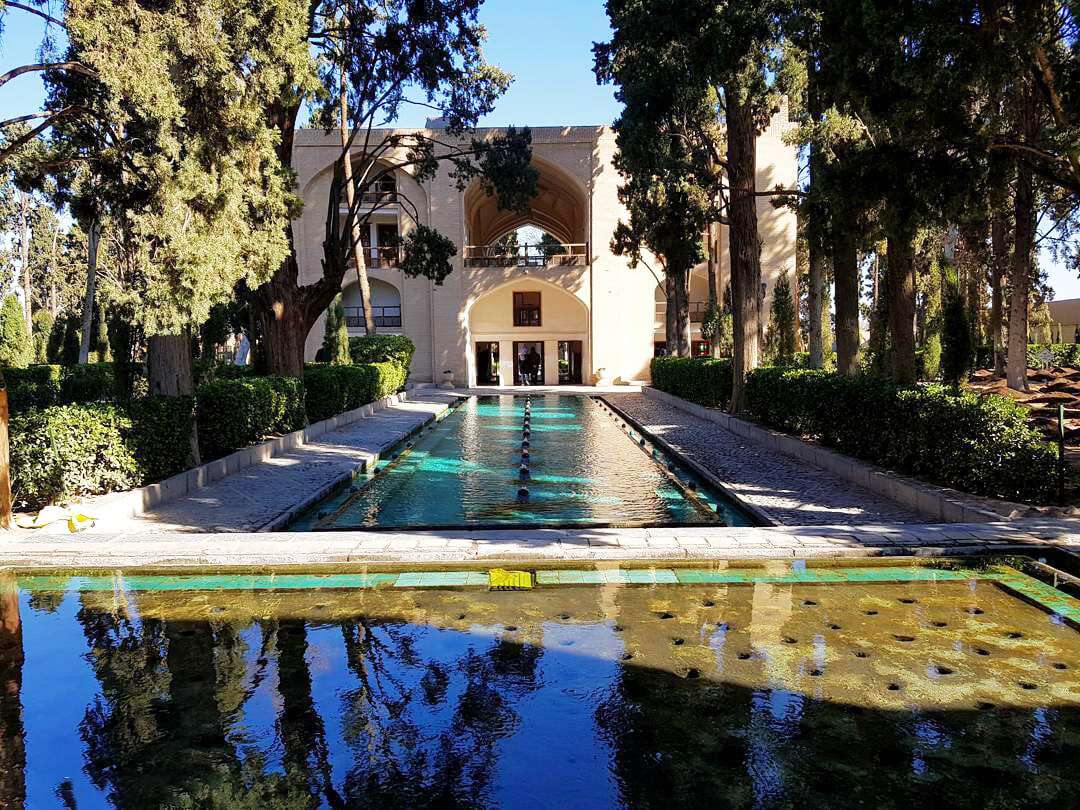 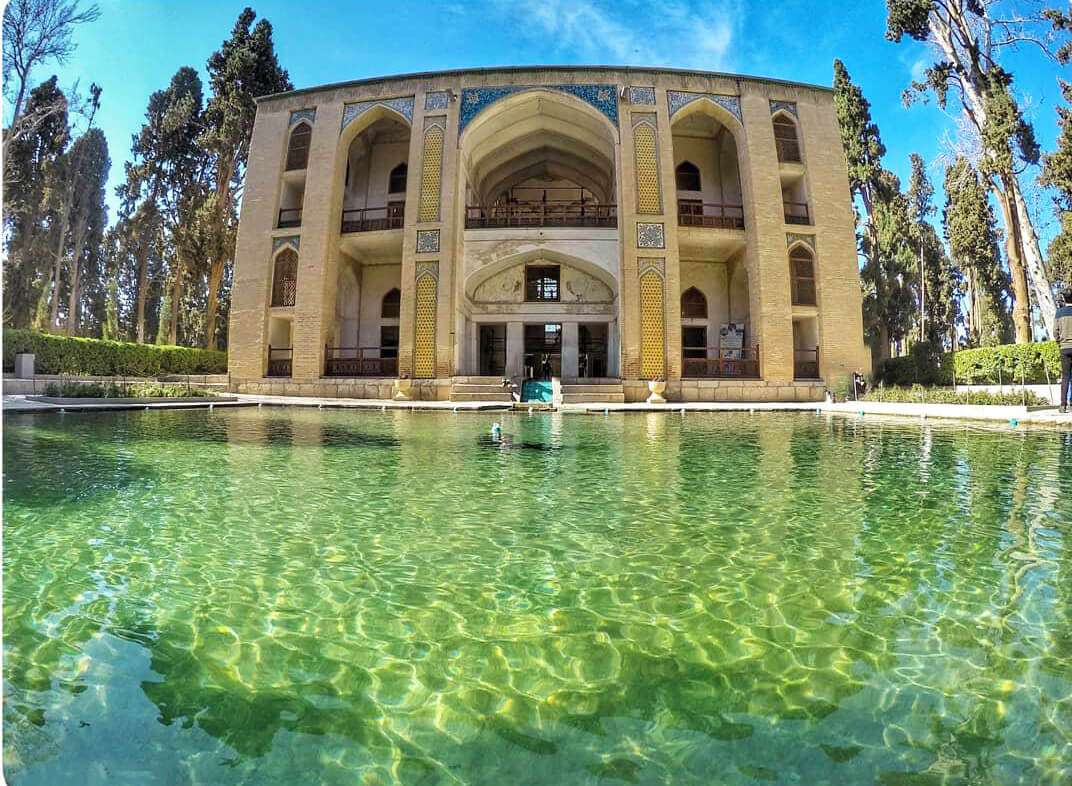 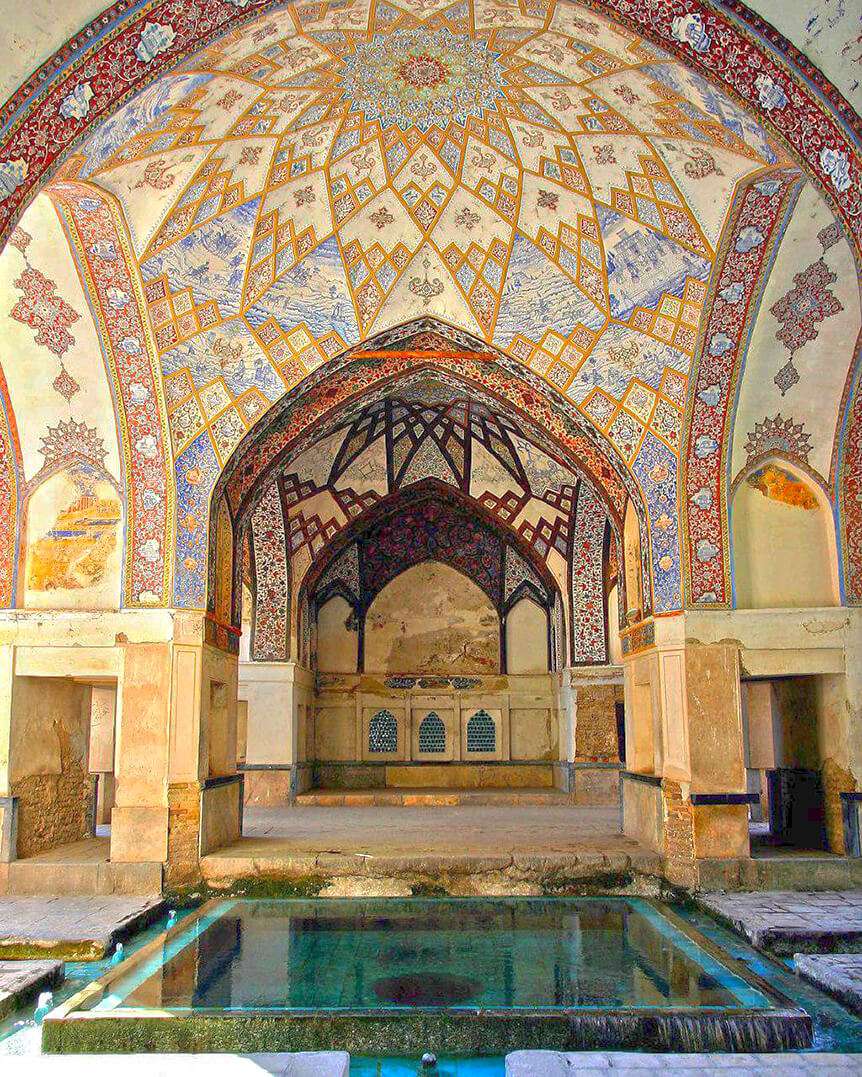 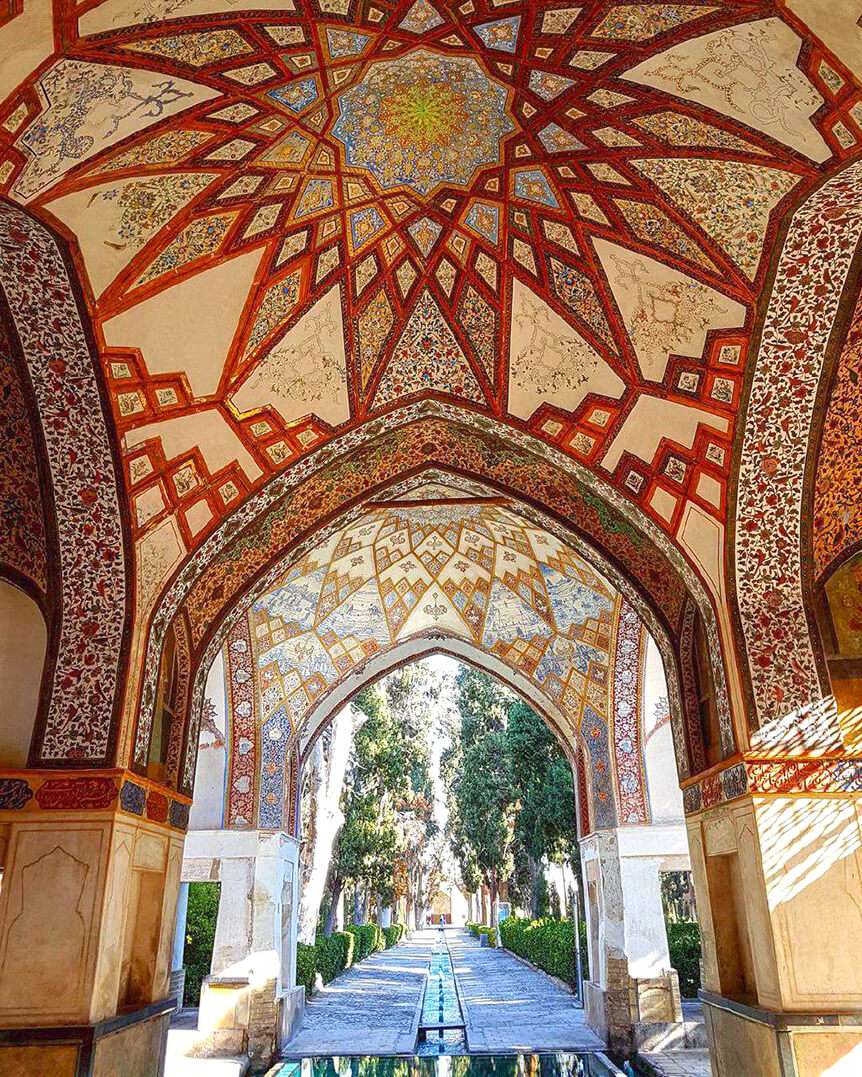 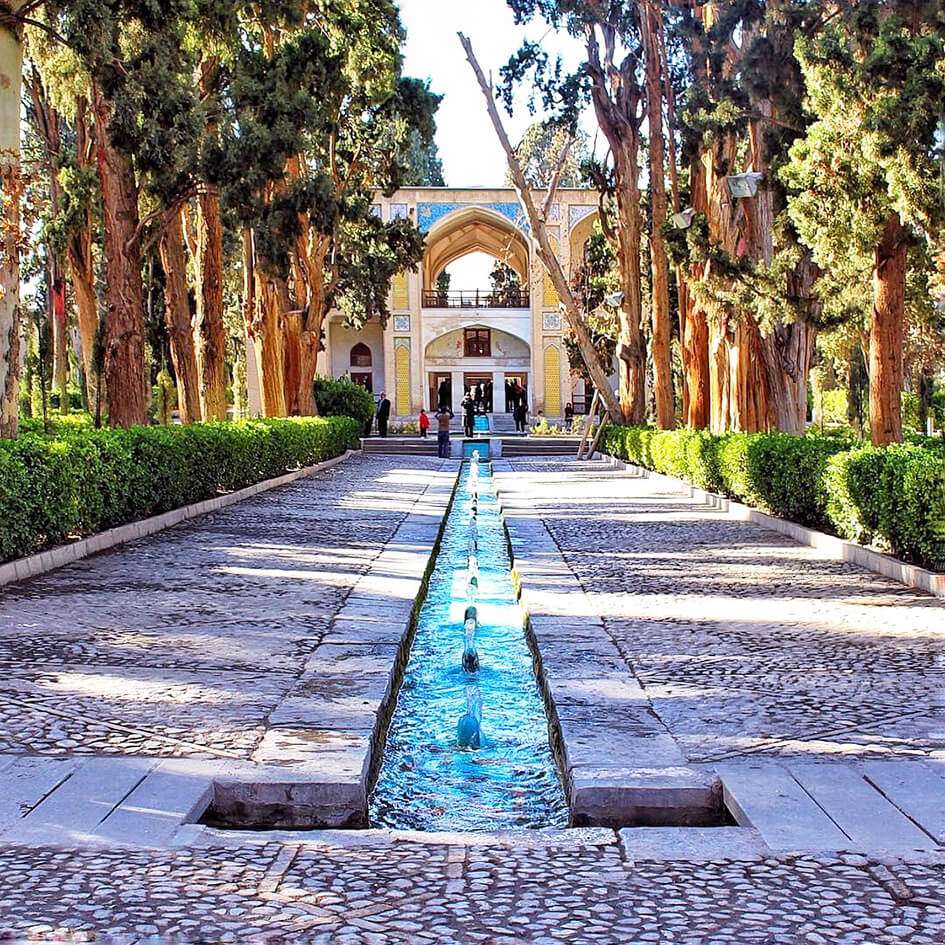 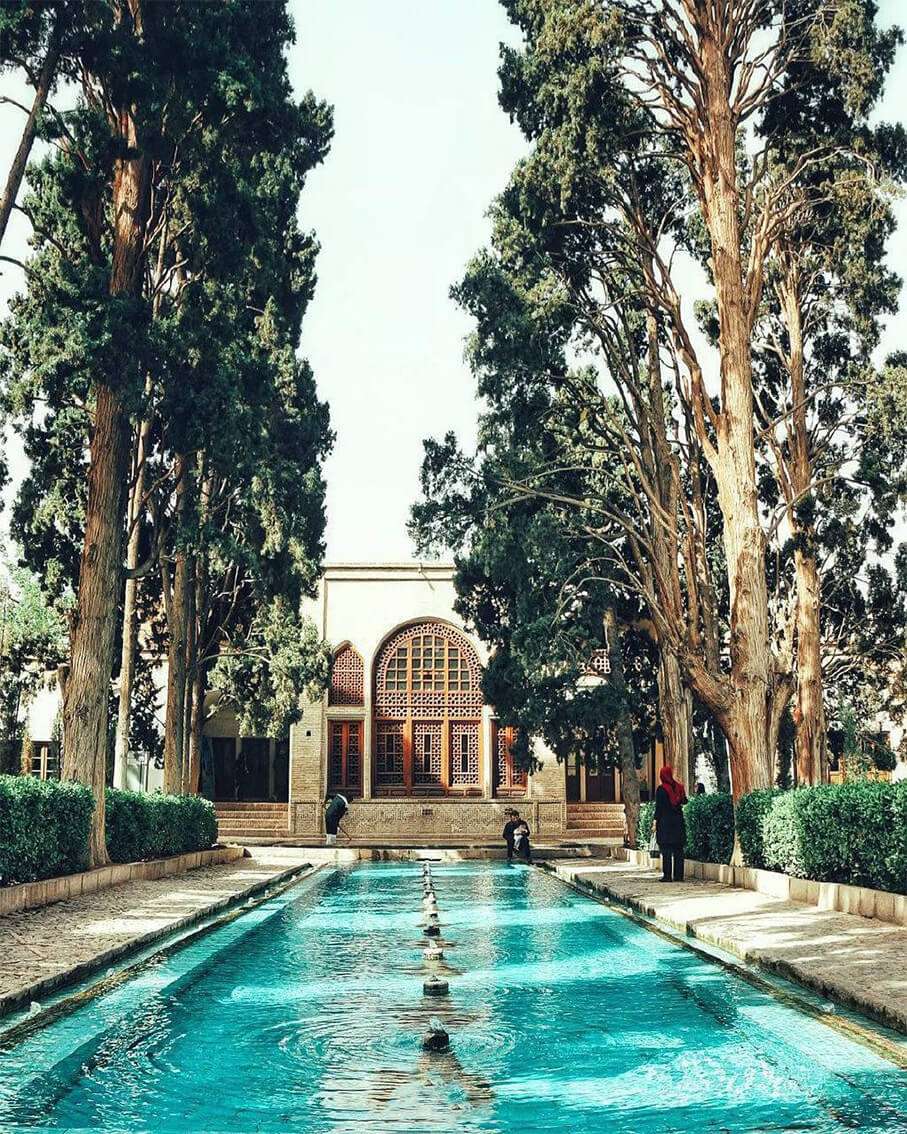 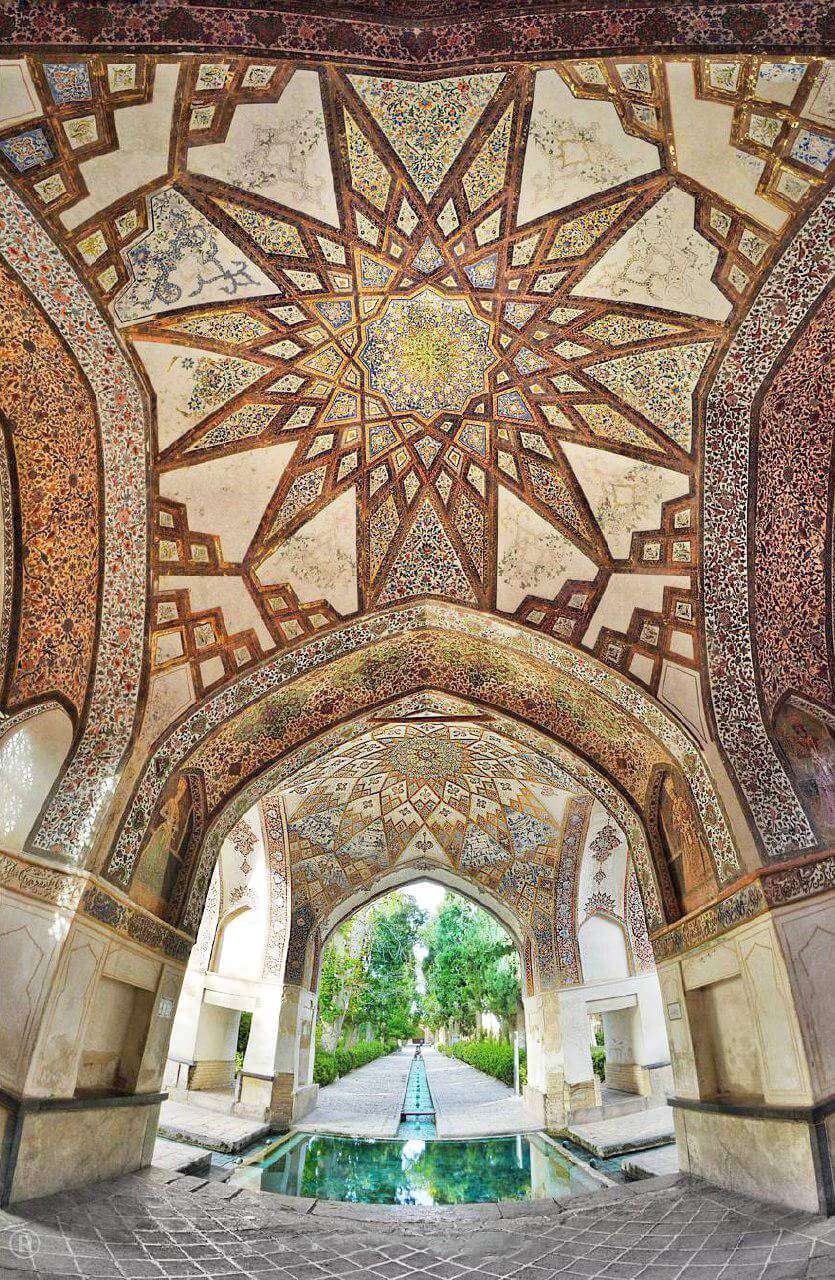 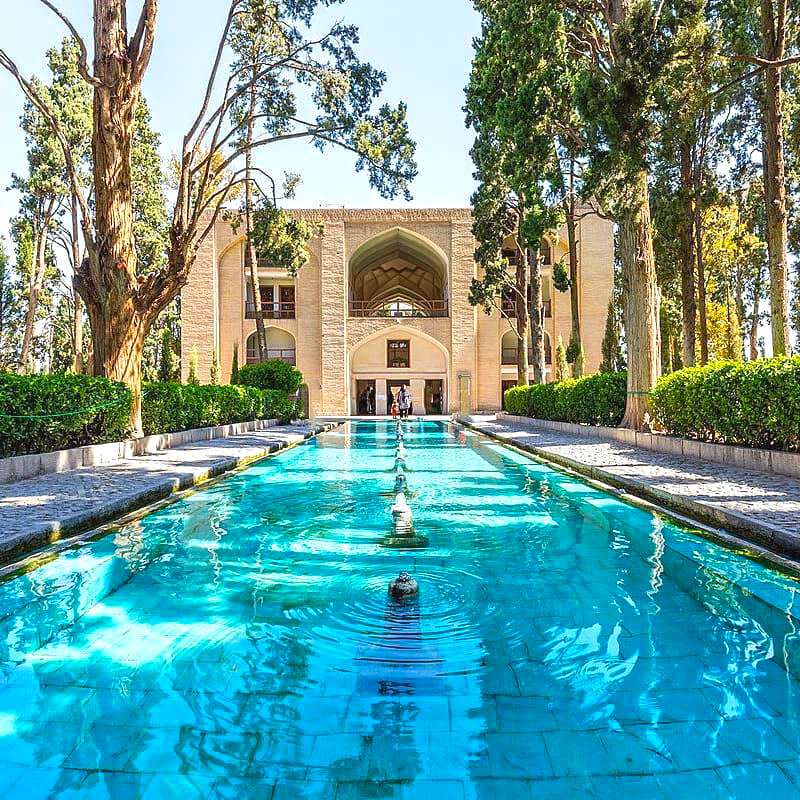 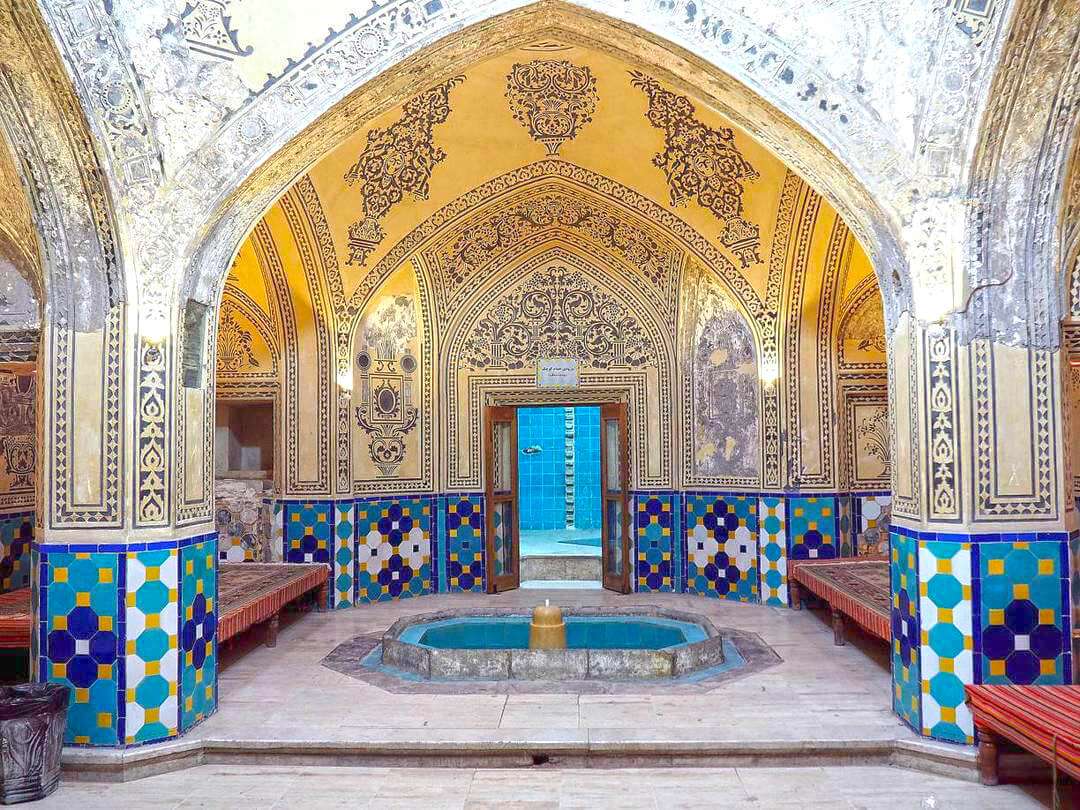 Persian garden, nowadays enjoying a unique, universal status in the world's architecture, has a history of at least 3000 years. It is generally rectangular in shape, enclosed within high walls and containing water channels, alleys, symmetrical trees, and stone fountains, which dates back to the Achaemenid era as its structural model has been traced to the Pasargadae garden, 6th century B.C. A great number of gardens were built during the Sassanid era and the tradition continued to the Islamic era.

Nine Persian gardens in Iran are registered as world heritage sites by UNESCO, including Fin garden (Bagh-e Fin). These gardens have symbolized different ideas; from the philosophical idea of materializing the Eden on the earth to the political one, indicating the king has built a green garden out of an infertile land. The ancient Persian gardens were characterized by a four-section layout design, which is rooted in a Zoroastrian belief that the whole universe is composed of four sacred elements (water, wind, fire, and soil).

An oasis of geometrical pools and fountains in the middle of the desert, Fin Garden spreads over an enclosed 1.5-hectare rectangular space with four circular watch-towers at each corner. As water was a fundamental element in designing the Fin Garden (Bagh-e Fin), symbolizing the spirit and spring of life, several streams of fresh water, supplied by Soleymanieh (Solaymānīyah) spring, have been installed across the garden. The stout cypress trees of Kashan are not only an iconic feature of the garden but also of the city.

Entering through the main gate on the eastern side, you will find several structures remaining from different ages. The present garden was built over the remains of a previous one, with the same name (the Old Fin Garden), which had been built during the reign of Buyid dynasty, about 11 centuries ago. Later on, the new garden was mainly built by the order of Shah Abbas (1587-1629) and continued by Shah Safi (1629-1642). This magnificent garden was destroyed twice in the earthquake, once due to the earthquake in 1574, and the second time in 1778. Therefore, the garden has been renewed several times and several buildings have been added to the original structure. These restorations were undertaken by Safavid kings Shah Safi, Shah Soleyman, Shah Tahmasb, Shah Abbas; the regent of Iran during Zand era Karim Khan Zand; and finally in Qajar period by Fath-Ali Shah. In addition to its exemplary structure, this garden was a scene of royal ceremonies, such as the coronation of Shah Ismail I, and murder of Amir Kabir, one of the most tragic events in the history of Iran. At the time of Constitutional Revolution (1905-1911), the Fin Garden became a refuge for the people affected by the ups and downs of the storming events of the time.

The Safavid buildings in this garden include an entrance portal on the north-east of the garden, a large bathroom on the eastern side and a pavilion at the center, called Shotorgalū’e Safavi or Kūshk-e Shāh Abbāsī. The pavilion is a square shaped, two-storied building, built in the 17th century. It has a domed ceiling space in the middle, surrounded by four alcoves on each side. The exquisite interior paintings of the pavilion were done by the famous Safavid painter, Rezā Abbāsī. Unfortunately, only a part of these paintings has survived. The building is fronted by a large pool which reflects the picture of this handsome 400-year old pavilion. Interestingly, the pavilion was named Shotorgalū, literally means “camel throat” and refers to an S-shaped aqueduct widely used in Persian traditional architecture, especially in the building of pools. It allows the water to come out with more pressure from the hole in the middle of the pool and seem like a water spring. As a tradition, people throw coins into the pool and make a wish. They believe if their coins fall right into the hole (the Shotorgalū) their wish would come true.

In Zandīyah restoration, a building was also added at the southwest of the garden named Khalvat-e Karīm Khānī. It is a small courtyard encircled by several rooms on three sides and an entrance portal, including a vestibule (hashtī), on its fourth side. After complete renovations, this building has been converted to the guesthouse of Kashan’s Cultural Heritage Organization.

Qajarid relics in the garden include a pool in the middle, a bathhouse for servants, a library and Fath-Ali Shah’s pavilion called Shotorgalū’e Qājār. Fath-Ali Shah’s pavilion with intricate paintings and stucco work is located on the southeastern corner of the garden. It consists of a porch-like, semi-open space which opens to an area with four barrel vaults topped with a dome, displaying eye-catching interior decorations, especially the splendid floral paintings executed by Kamal al-Molk’s ancestors.

The restorations and developments carried out during the Pahlavi period include the construction of Kashan's National Museum on the ruins of Nezam al-Molk court (who was Fath-Ali Shah’s son-in-law) known as Khalvat-e Nezām al-Molk, on the western side of the garden. Some restorations were carried out in 1958 and currently, the museum comprises three parts: archeology, anthropology, and handicrafts.

Surrounded by pools, fountains, trees, and shrubs, the construction of the bathhouse has been designed so as not to attract much attention from the outside. It consists of two bathhouses: the smaller one is as old as the original structure of the garden, dating back to the Safavid era. It was used by the servants and ordinary people. The larger one, after the order of Fath- Ali Shah Qajar (Fath-‘Alī Shāh Qājār) to repair and expand the garden in 1805, was dedicated to the royal family and the dignitaries. A stokehold, placed at the center of the hot water pool (khazīneh) was used to heat the water. There were also other channels connected to the stokehold which passed from under the bath floor and heated the other parts of the bath. The holes on the ceiling are covered with colorful special glasses (majdī) which, in addition to amplifying the light, obscure the vision from the outside.

Historically speaking, the fame of Fin Bathroom and the garden is tied to the tragic and notorious assassination of Mīrzā Taqi Khān Farāhānī, known as Amir Kabir, the prime minister of Naser al-Din Shah Qajar. Amir Kabir was renowned for his significant political and educational reforms, which caused much animosity toward him among the courtiers and lead to his exile and murder. Naser al-Din Shah was regretful about Amir Kabir’s exile but the courtiers managed to persuade the drunken king to issue an order for Amir Kabir’s murder. The order was executed when Amir Kabir was in the bathhouse. He was not allowed to make a will or meet his family. He was just given a chance to choose how he would like to be killed. He wanted the barber to cut his wrist. The scene of his murder is reenacted by the mannequins in the small bathhouse.

There are several channels on the southwestern part of the garden. These channels are called Men’s spring and women’s spring. Women’s spring preserves half of the water of the main one (Soleymānieh spring) which is now turned into a coffee shop. The men’s spring holds a big pool outside the garden.

The garden is closed on National Holidays (only the religious mourning days)
It is open from 9:00 AM to 7:00 PM (at the time of writing)
The garden has a teahouse in the southwest corner
You need to pay an extra fee (about 2 €) for visiting the museum.