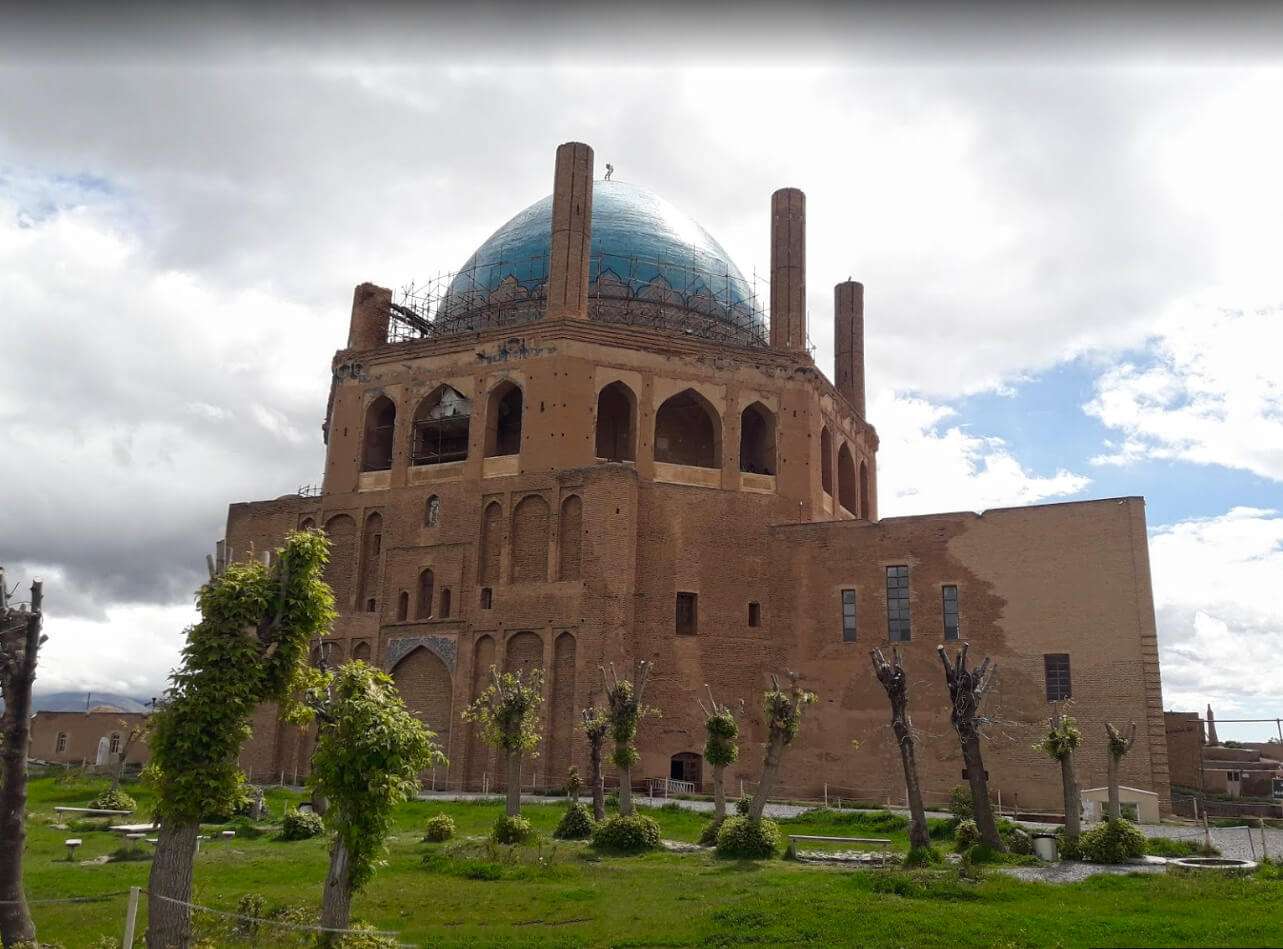 Photos of the Dome of Soltaniyeh 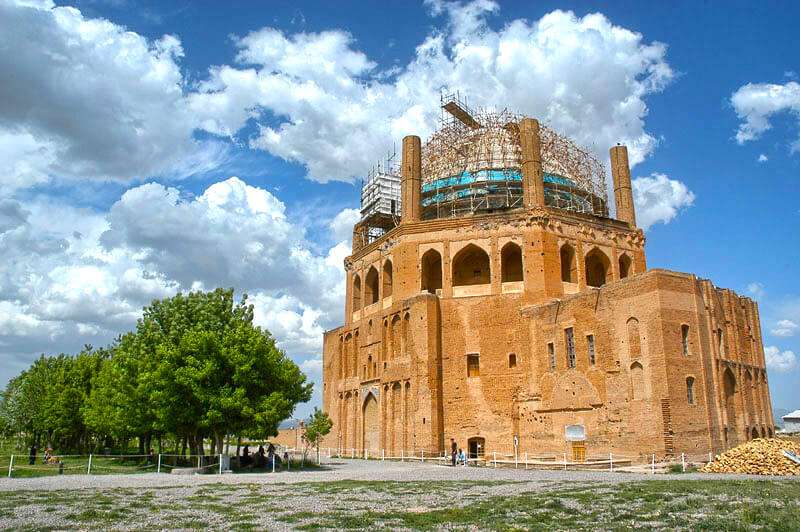 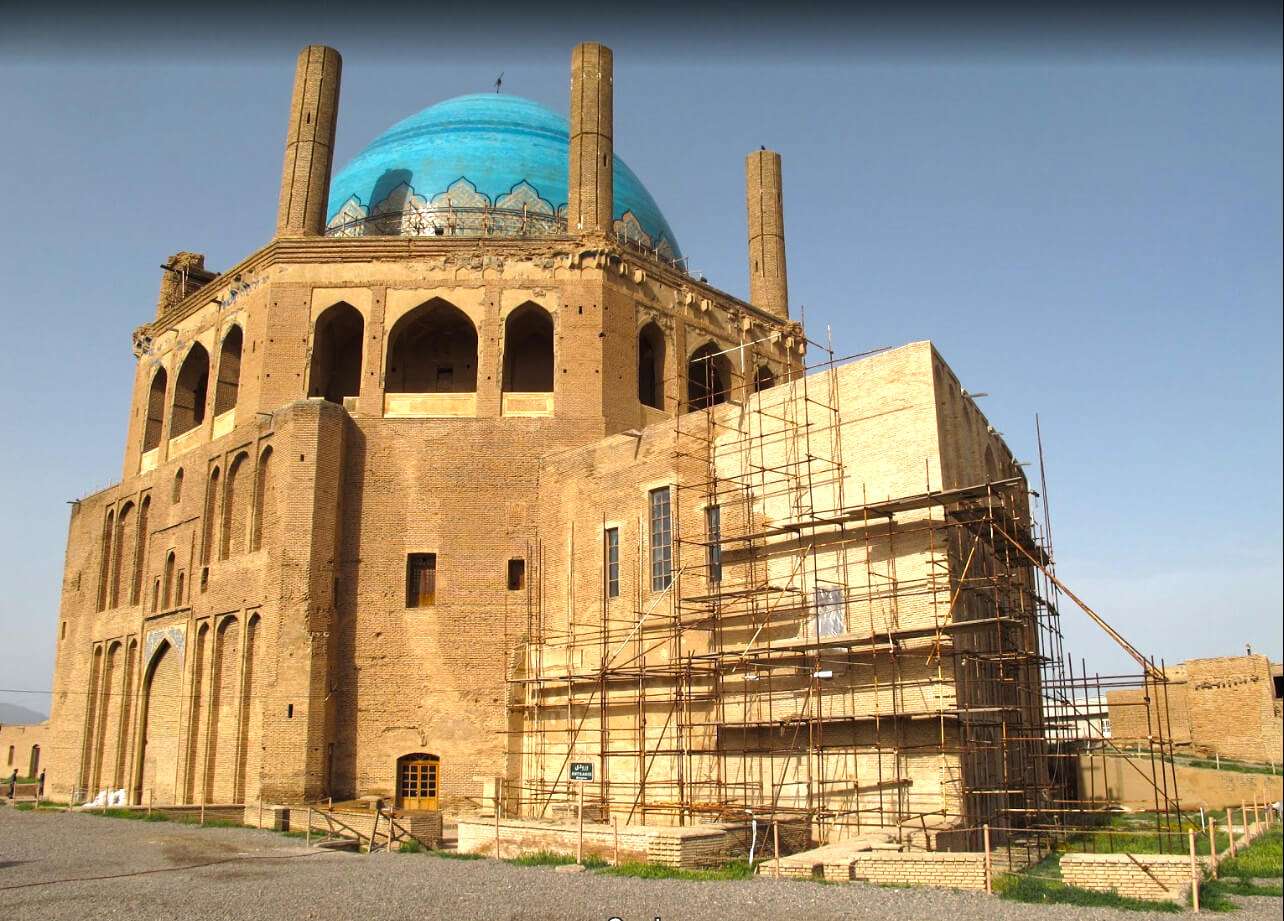 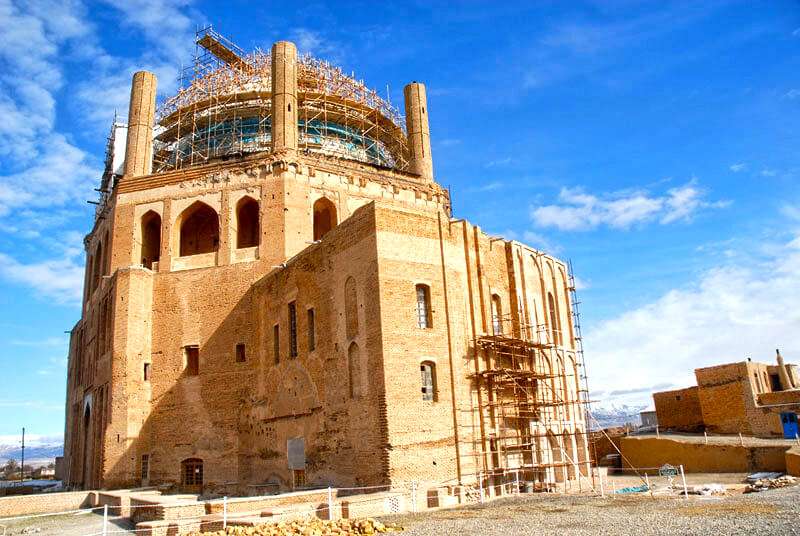 Explore the Dome of Soltaniyeh

According to the historians, Soltaniyeh was founded by Arghun Khan the fourth ruler from the house Ilkhanate. He decided to build a city in the Sherviaz area, but he died very soon. His Son, Oljayto, decided to actualize his father’s dream, so he called the best crafters from all over the country to erect a splendid city. They first built a stone square-shape fort around the city (about 520 * 520 meters). It was reputed that the wall of the fort was so thick that four horsemen could ride beside each other above it. Each 520-meter wall had a gate and 16 watchtowers. They called the newly built city Soltaniyeh (literally the place built by the king). During a 10-year period, Oljayto commissioned many administrative and royal buildings, mosques, hospital, bathhouses, libraries, bazaars, and caravanserais which architecturally were built in an artistic manner. After 10 years, the city gained such a superior level that the capital of Ilkhanates was transferred from Tabriz to Soltaniyeh. By the death of Oljayto, the city lost its status as a prosperous city. Pietro Della Valle, the Italian traveler stated in his travelogue, that about 14000 families abandoned the city after the death of Oljayto because the majority of residents were the crafters, merchants, and, artisans who were forced to live there by Oljayto. Finally, the city was conquered by Tamerlane, the founder of the Timurid Empire in 1382, and the most part of it was ruined.

In the historical memory of Iranians, the Mongol invasion is characterized by destruction and desolation. However, some years after the conquest, Persia under the rule of Mongols backed to track and experienced growth and prosperity in different fields. Architecture, is one of the fields which continue to flourish in this era. In fact, the architecture inherited from the Seljuks and Buyids evolved in Ilkhanid era. Gonbad-e Soltaniyeh is one of the best examples of Ilkhanid architecture which represent the glory of Iranian-Islamic architecture in 14th century.

Gonbad-e Soltaniyeh and its surrounding meadow land is recognized by UNESCO as a world heritage site. The lofty domed structure nestled in the middle of a green land is a must see in Soltaniyeh. It is originally built as the mausoleum of Oljayto, the eighth ruler of Ilkhanates. As mentioned before, he was commissioned Soltaniyeh and made it a prosperous city. His mother was a Christian, so he was baptized by the name of Nickola. After death of his mother, Oljayto married to a Sunni Muslim girl and gravitated toward Islam and choose the name of Mohammad Khodabandehloo. Later, he turned to the Shia branch of Islam due to political reasons. Reputedly, he intended to build this mausoleum to be the burial place of the first and third Shia Imams (Imam Ali and Imam Hussain) and turn the Soltaniyeh to the main pilgrimage destination for the Shias, but his idea was strongly rejected by many in Iran and Iraq.

Completed in 1312, the mausoleum consists of an octagonal brick structure crowned by a huge turquoise tiled doubled-shelled dome. Being 54 meters in height and 25 meter in diameter, It is the third highest brick dome in the world after Santa Maria del Fiore dome in Florence and the dome of Ayasofya mosque in Istanbul. Sir Percy Molesworth Skykes mentioned Soltaniyeh in his book titled “History of Iran”, and compared it to the other high domes in the world:

“Soltaniyeh structure, or Khoda Bandeh dome, has maintain its beauty and grandeur despite the other buildings annexed to it”.

Each wall of the mausoleum has the height of 48.5 and thickness of 7 meters and displays three open arches on the upper part of façade. There is a minaret on each of the eight corners. These minarets with the original height of 15.5 meters and 3-meter capitals were built only as a part of ornamentations. All the eight sides has high ayvans. The ayvans on the cardinal directions have no decorations, while the other ayvans boast stalactite (moqarnas) decorated cornice.

The dome hall (the above mentioned octagonal building) consists of three levels. On the ground level, there are two stairs on the east and west sides of the northern wall led to gallery of the second level. The curved gallery turns around the building. The third level which carries the dome is reached by another stair on the northwest side. The gallery in the third level doesn’t open to the interior space. The noteworthy point about the architecture of the building is that the heavy huge dome is supported by corbels and it is standing completely independent from the lower building.

On the south wing, an extra section was added which is called Torbat-Khaneh. Designed to be the burial place of Sultan Mohammad Khodabandehloo, it is a trapezoid-shaped vaulted room with the length of 17.60 m, width of 7.80 m and height of 16 m. There is a prayer niche (mihrab) in the southern wall which its decorations are not survived properly. It is said that Sultan Mohammad is buried in the crypt (sardabeh) under the Torbat-Khaneh. The stairs on the south side led to the crypt.

In addition to the exquisite architecture, the monument is also known for unique decorations. Generally, Gonbad-e Soltaniyeh is decorated in two phases. The first phase includes tile work and geometrical brick works dating to the time when it was planned to be the burial place of Imam Ali and Imam Hussain. The wall surfaces were covered with pale yellow bricks and turquoise tiles boasting Kufic inscriptions containing the names of God and Shias’ Imams. These decorations can be seen on the four sides (on the non-cardinal directions) to the height of 7 meters. It seems that the exterior stucco decorations and tile work of the dome were done in the first phase.

About 500 meters to the southwest of Gonbad-e Soltaniyeh, there is another monument known as the mausoleum of Sultan Chelebi Oghlu who was a famous mystic and vizier of Sultan Mohammad. He died in 1319 and a tomb tower was erected on his grave in 1330. The octagonal adobe tomb tower with the height of 16 m is surmounted by a 6-meter dome. Inside the tower, there are several chambers and a court for Sama (a Sufi ceremony), and a crypt under the chamber. A prayer niche (mihrab) in the court boasts stalactite decorations (moqarnas).

Khaneqah built in 1333, includes a central courtyard and chambers on its west and east sides. Being the place of Sufis, it is planned according to the Sufism beliefs and degrees. The single chambers have short door, probably a place of austerity (riyada) for disciples. The second storey is ruined to most part due to Tamerlane invasion.

Another mausoleum, located 2.5 km to the south of Gonbad-e Soltaniyeh, belongs to Molla Hassan Kashi a Sufi mystic and poet in the court of Sultan Mohammad Khodabandehloo. However, the current mausoleum is built on his grave in 1566 (about 2 centuries later) during the time of Shah Tahmasp. This Safavid monument, located in the vast meadow land, is an octagonal structure from the exterior, topped with a double-shelled dome. Inside the mausoleum, one can observe a square-shaped hall (6*6 m) which four galleries are annexed to each corners. These galleries open to the porches through large doorways. The stairs in the galleries led to the second level. The interior decorations include turquoise tile work and Kufic inscriptions bearing the repeated name of Imam Ali and Prophet Mohammad. The stucco stalactite decorations (moqarnas) was commissioned by Abdollah Mirza, son of Fath-Ali shah and ruler of Zanjan, in the early 19th century.

The Mausoleum of Oljayto is open every day except on the national holidays (only the religious mourning days).

Things To Do In Soltaniyeh