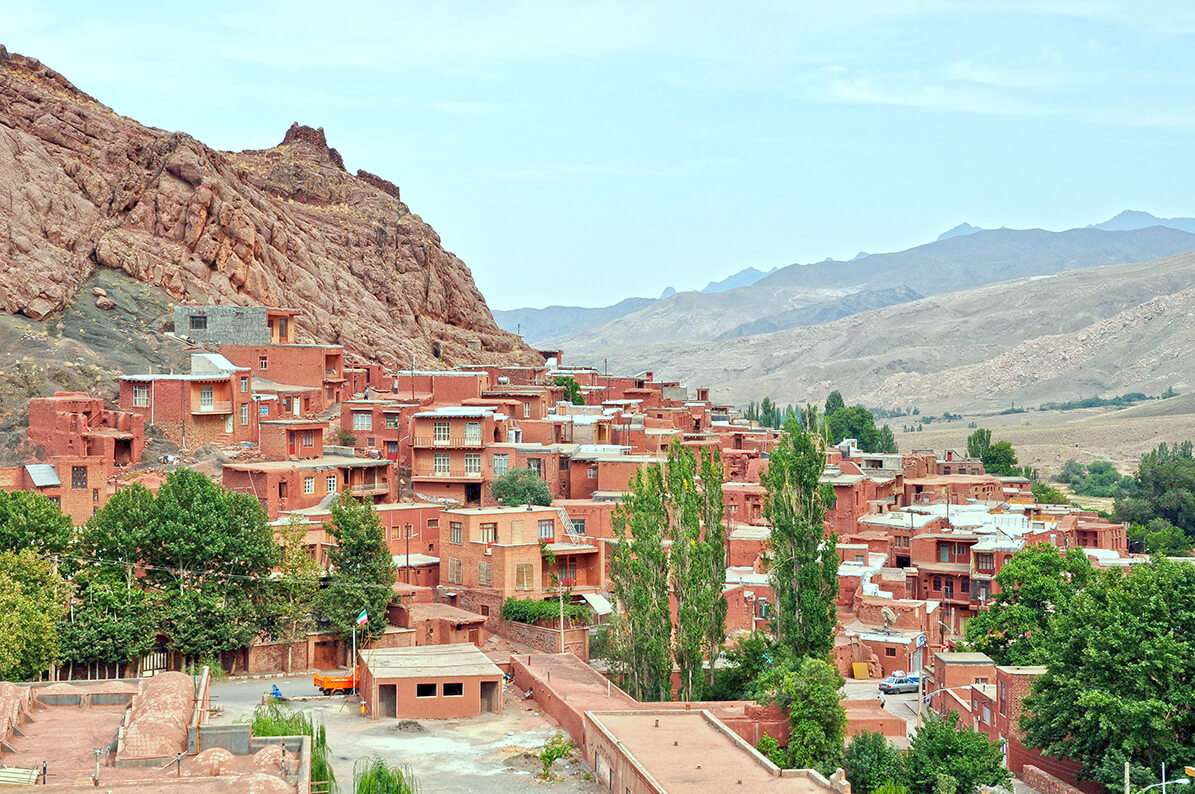 Wandering along the pass ways of the terracotta village of Abyaneh, perched on the foot of Karkas Mountains, some 85 km southwest of Kashan.

Photos of the Abyaneh Village 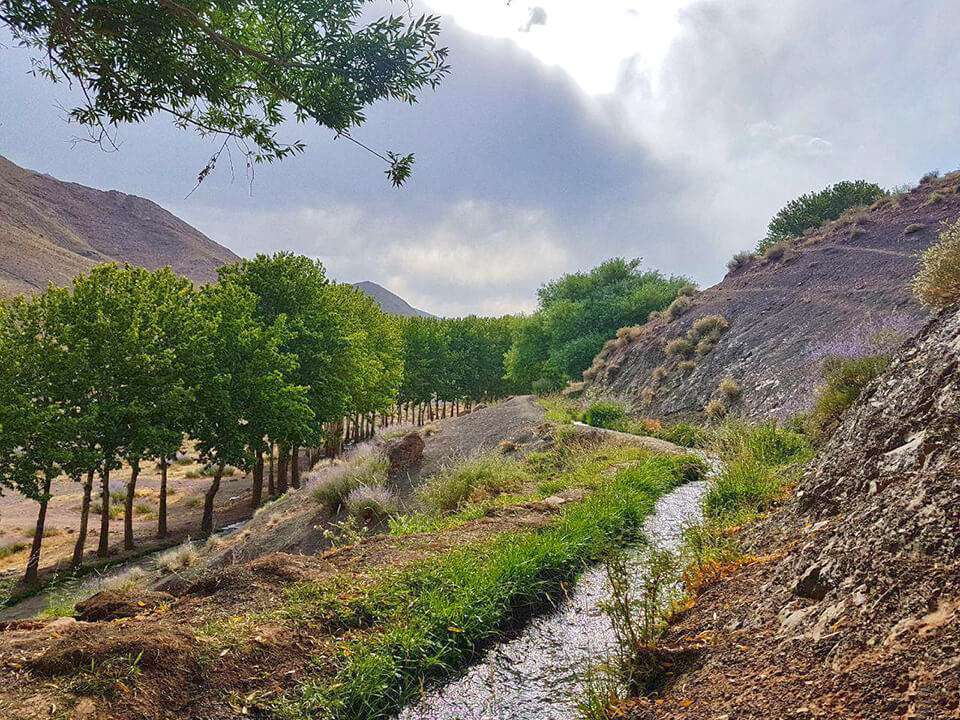 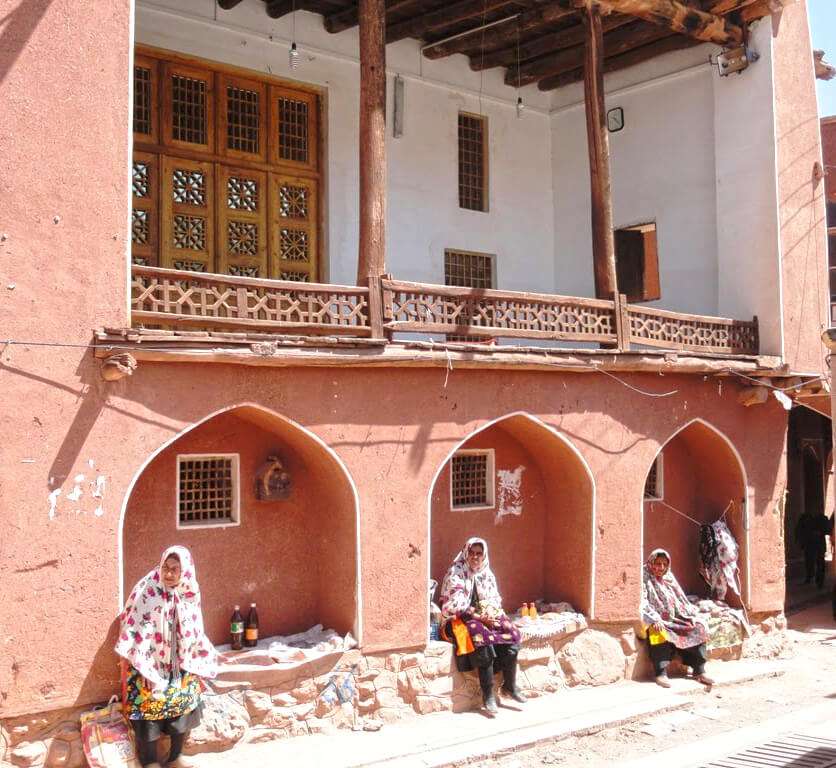 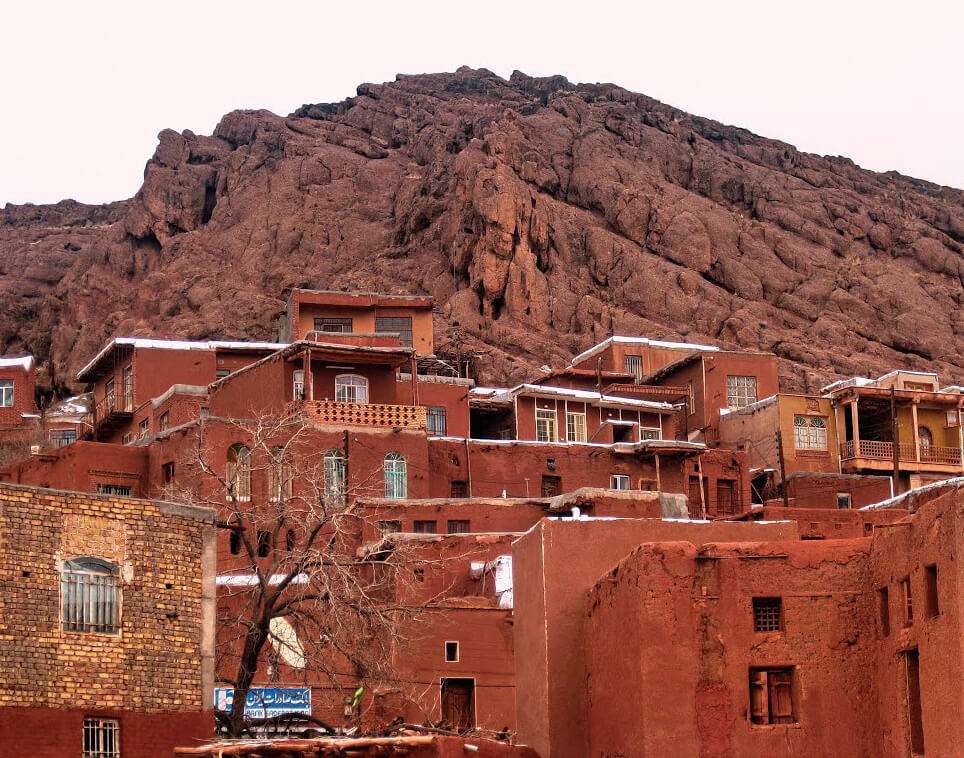 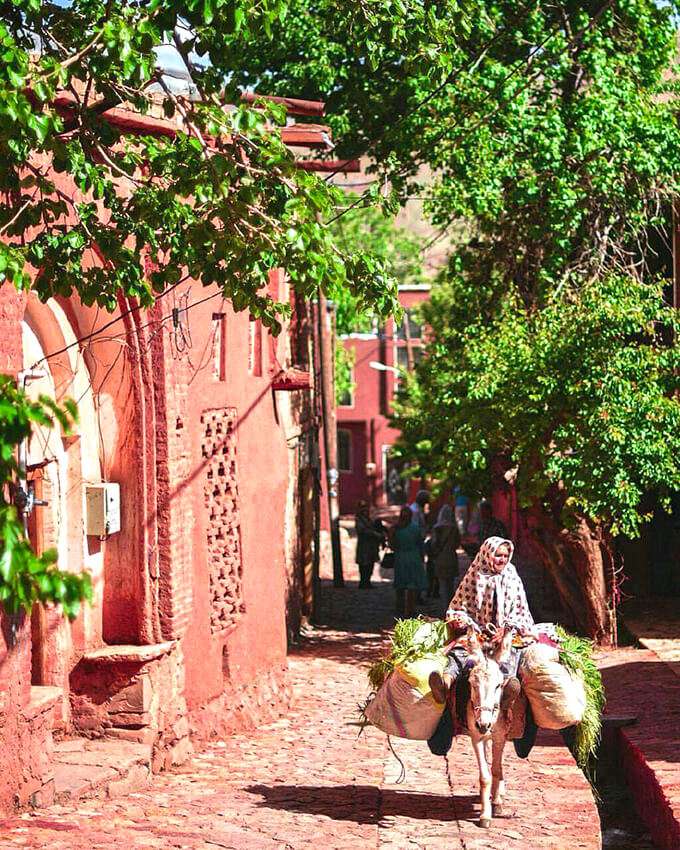 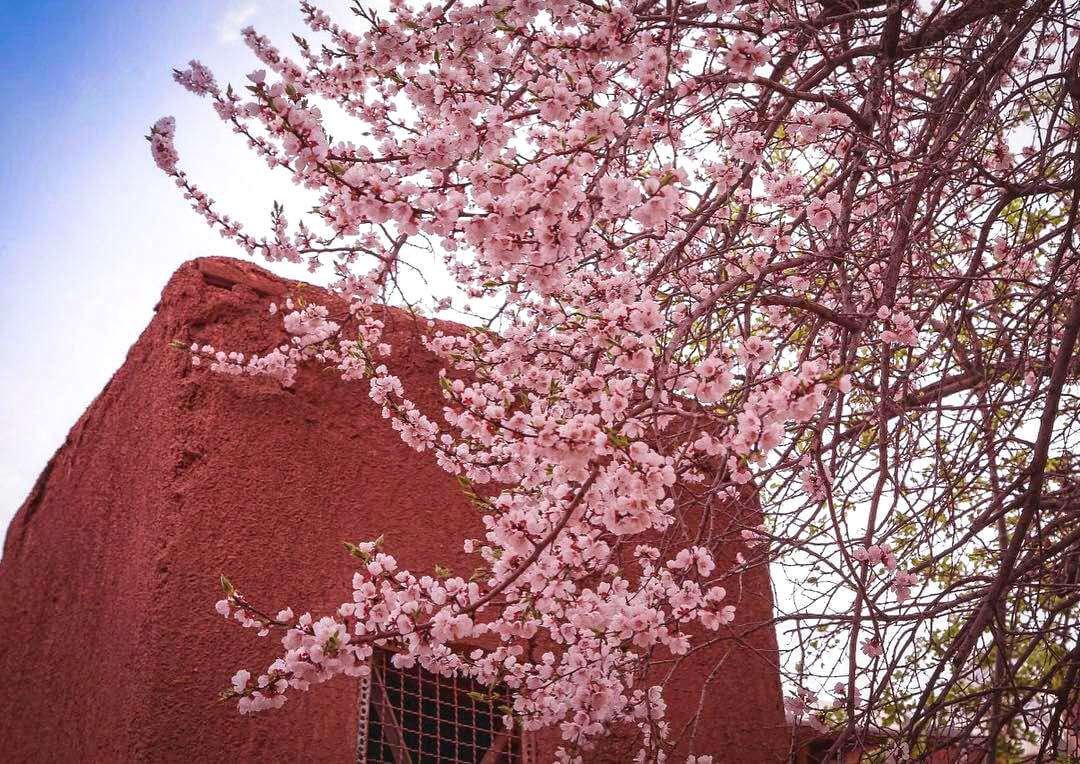 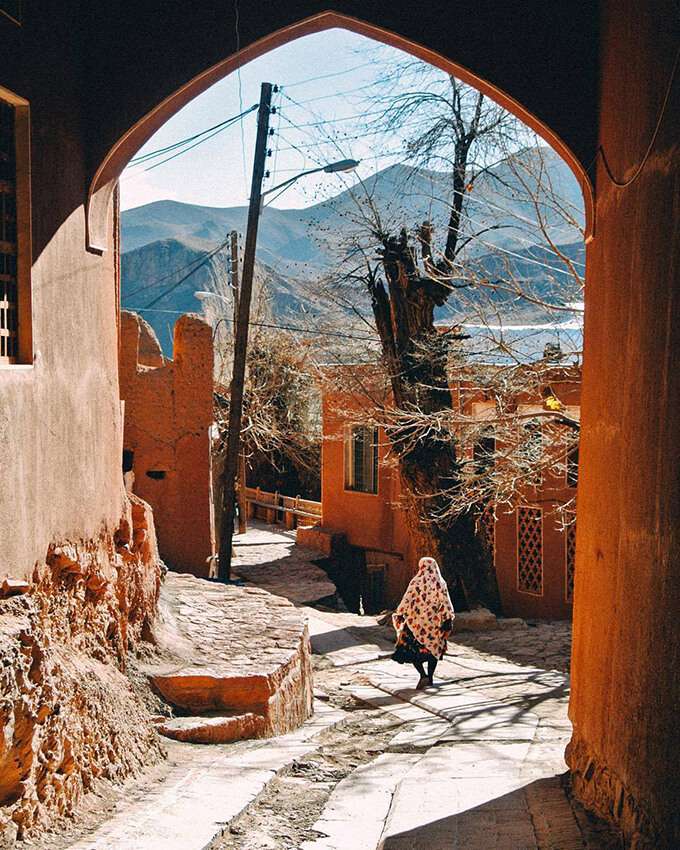 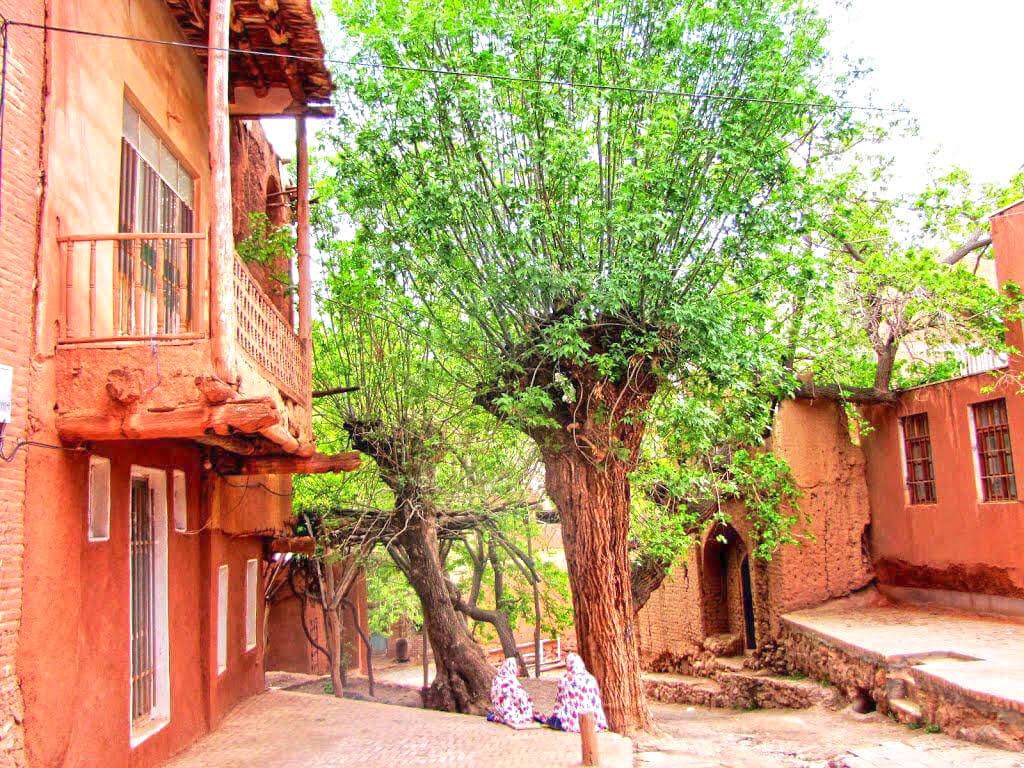 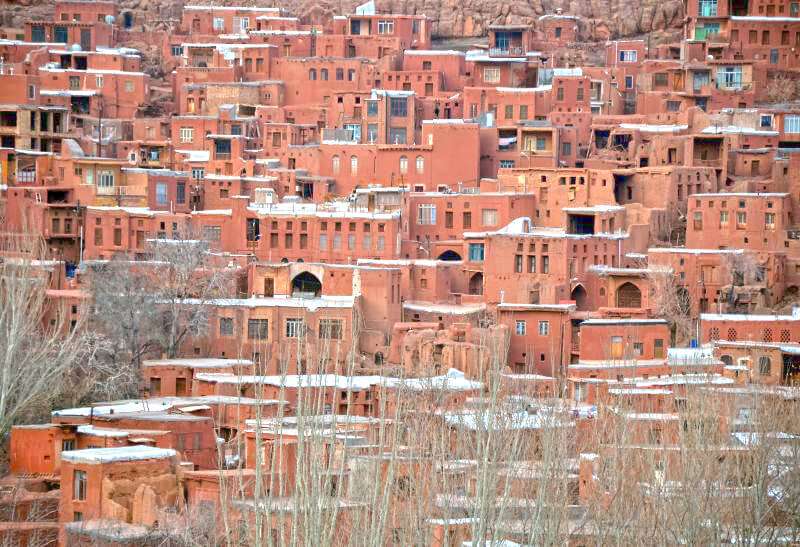 The alluring village of Abyaneh, perched on the slope of Karkas Mountains, is one of the must-sees in Kashan, and its suburbs. The name has derived from “Viuna”, meaning a garden of willow trees, due to the abundance of willow trees in the valley. Prior to Safavid reign, the valley’s residents used to be followers of Zoroastrian religion, then a part of them converted to Islam, and the others migrated to Yazd and India. The distinguishable feature of the people in Abyaneh is the level of literacy which is very high compared to other villages in Iran. Also noteworthy is the great attempt of the residence in preserving the local dialect, local dress, and other rites. The pleated skirt and the floral kerchief of the women has created an iconic symbol of the village.

Abyaneh is famous for the unique architecture and building materials of its houses. An image of Abyaneh consists of steep, narrow and twisting lanes through mud clay houses with balconies. The houses have been built side by side on the foothills facing the south, for this village goes through cold winters and it is important to take as much of the sunlight as possible. Most of the houses consist of two or more stories usually reached by stairs. Interestingly, some of these houses –usually from Seljuk or Il-Khanid periods– have no stairs, instead the residents use natural slope of the hills. Most of the ceilings are flat, made of pine and plane tree woods covered with red clay.

Narrow roofed lanes, giant old trees in streets where you can also find elder residents in colorful local clothes sitting in front of their houses and chatting with each other in Middle Persian, take visitors on a spectacular journey. To capture the visit, the visitors can stop at certain places to rent beautiful traditional clothes, and take pictures in front of an old, uniquely designed wooden door.

Abyaneh is also known for its unchanging Islamic religious-cultural traditions, such as the Moharram rituals held every year. In order to participate in the ceremony, the local people who are living elsewhere return to the village on the 9th and 10th of Moharram (the date of martyrdom of Imam Hossein, his followers and family). One of their rituals is that in the morning of Tasu‘a (Moharram 9th), the relatives of a recently diseased person spread a rug in front of their houses as a sign for the villagers to know where to stop. Men walk along the village alleys and stop in front of these houses to read the first sarah in holy Qur’an called fatihah, then they are served with tea and homemade sweets. Jighjighah ritual and Nakhl gardani are the other rituals practiced by people of Abyaneh every year in Moharram.

Some customs still practiced in this village, are offering food and drinks to the poor on Friday evenings, in Moharram and Ramazan (two of the lunar months) for the peace of the dead. In addition to this, the Iranian New Year celebration, Now Ruz, is celebrated for three days during which families set sofra (meaning tablecloth) and put different kinds of food on it. On the last Wednesday of the year, as all Iranians, the villagers celebrate the Chaharshanbeh Suri, during which they make bonfires and throw jugs of water into them, from the rooftops.

The most notable historical monument in Abyaneh is the Jame Mosque. Particularly remarkable is its wooden inlaid door decorated with floral patterns made in 1933 to replace the original one. This congregational mosque has two prayer halls; one hall is on the ground floor and is open to the public during prayer hours, the other one is on the basement. The most important historical works of the mosque are a carved fretted wooden pulpit (minbar) made of walnut wood, with an inscription pointing at the year 1073, and a finely carved wooden prayer niche (mihrab) dating back to 1084. The mihrab is inscribed by Koranic verses in Kufic script.

Another historical monument of Abyaneh is Purzaleh mosque, an originally Il-Khanid structure which was restored and completed in the Safavid era. Its second floor includes a large prayer hall built in 1650s. It also features a door surviving from 1301. It is considered a holy and respected site by the locals.

Walking down the narrow lanes of Abyaneh, you will reach to a small cozy mausoleum called Ziyaratgah. Stand at the spacious veranda in the shrine and enjoy the picturesque view of Abyaneh in the presence of a spiritual ambiance.

As the locals of this village have only recently converted to Islam, signs of their previous religion can still be found in this village. The remnants of a Zoroastrian Atashgah (fire temple) can be found on a slope near the village. The temple was built in three levels and several stages (from 5th to 7th centuries). Little has remained of its lowest (also the oldest) level. The second level contained some chambers and the altar. This level was topped by a Chahar taq, the skeleton of which and its broken dome can still be seen.

To visit the village, you need to pay an entry fee (about 1 € per person)
There are some houses in the village that women can hire a set of local costume and take a picture
The best time to visit the village is the early spring when the fruit trees are in the blossoms
The village is packed with visitors during weekends and national holidays.

Things To Do In Natanz