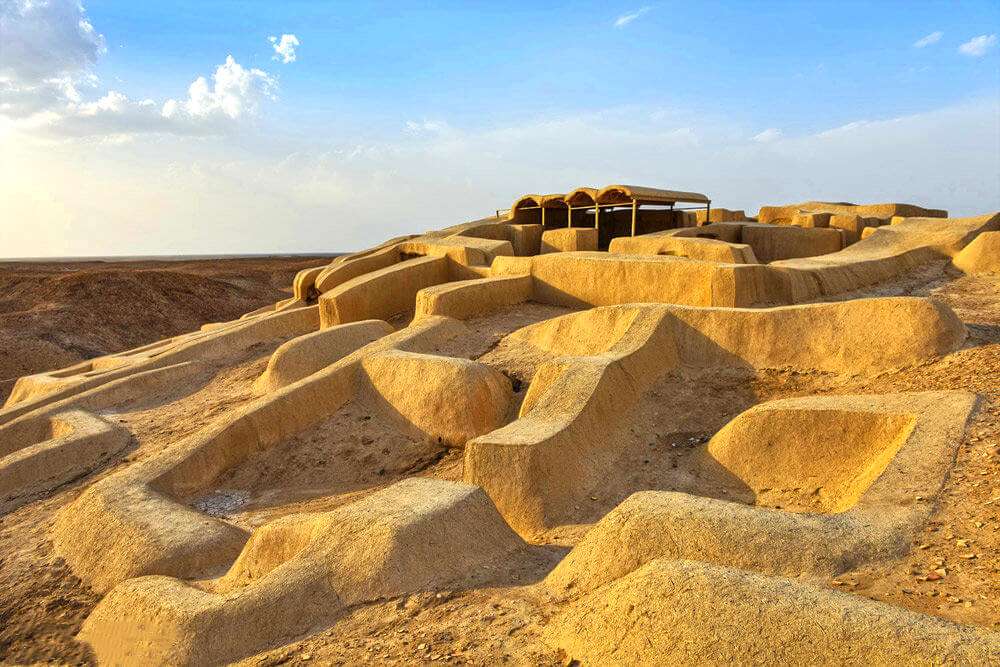 Wandering about the remains of the mudbrick city in the east of Iran. It dates back to 3200 BC. 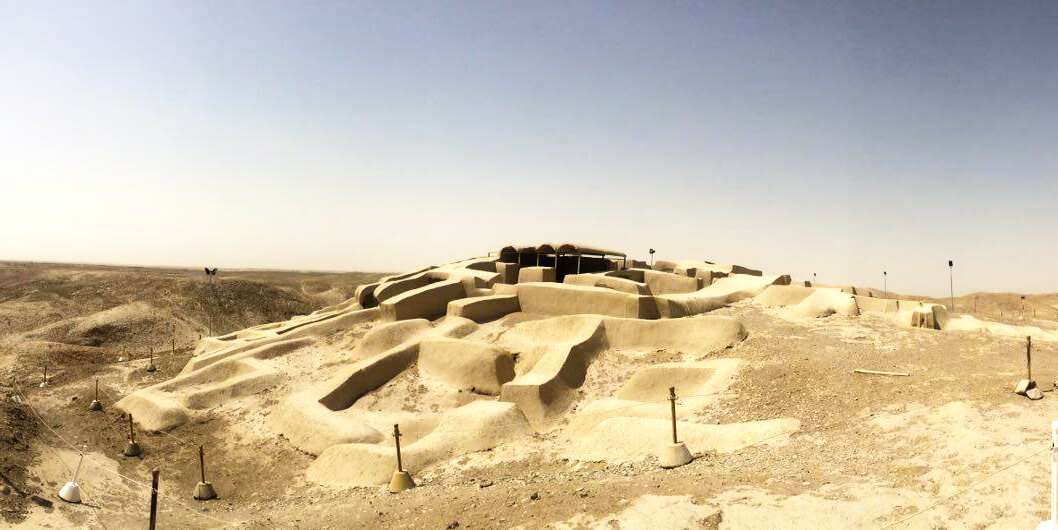 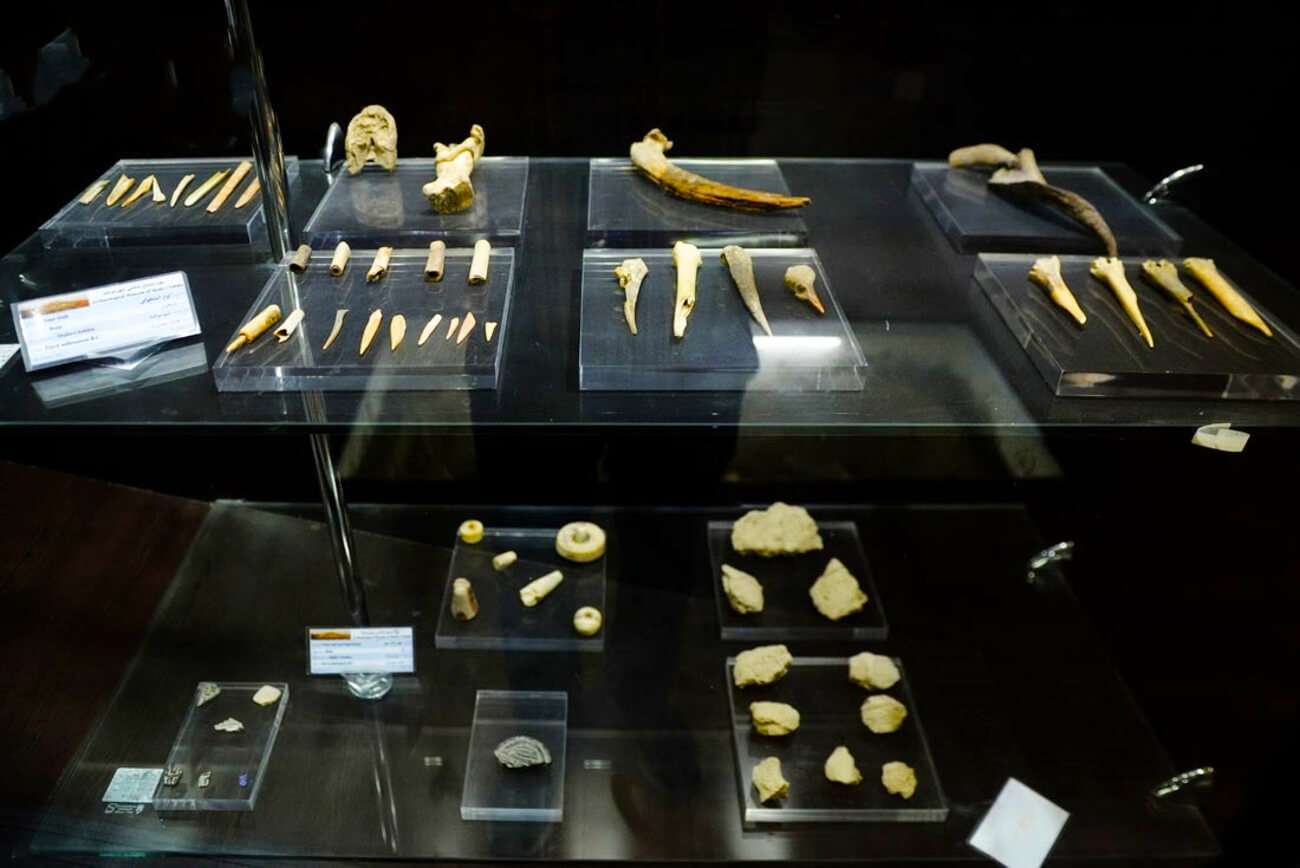 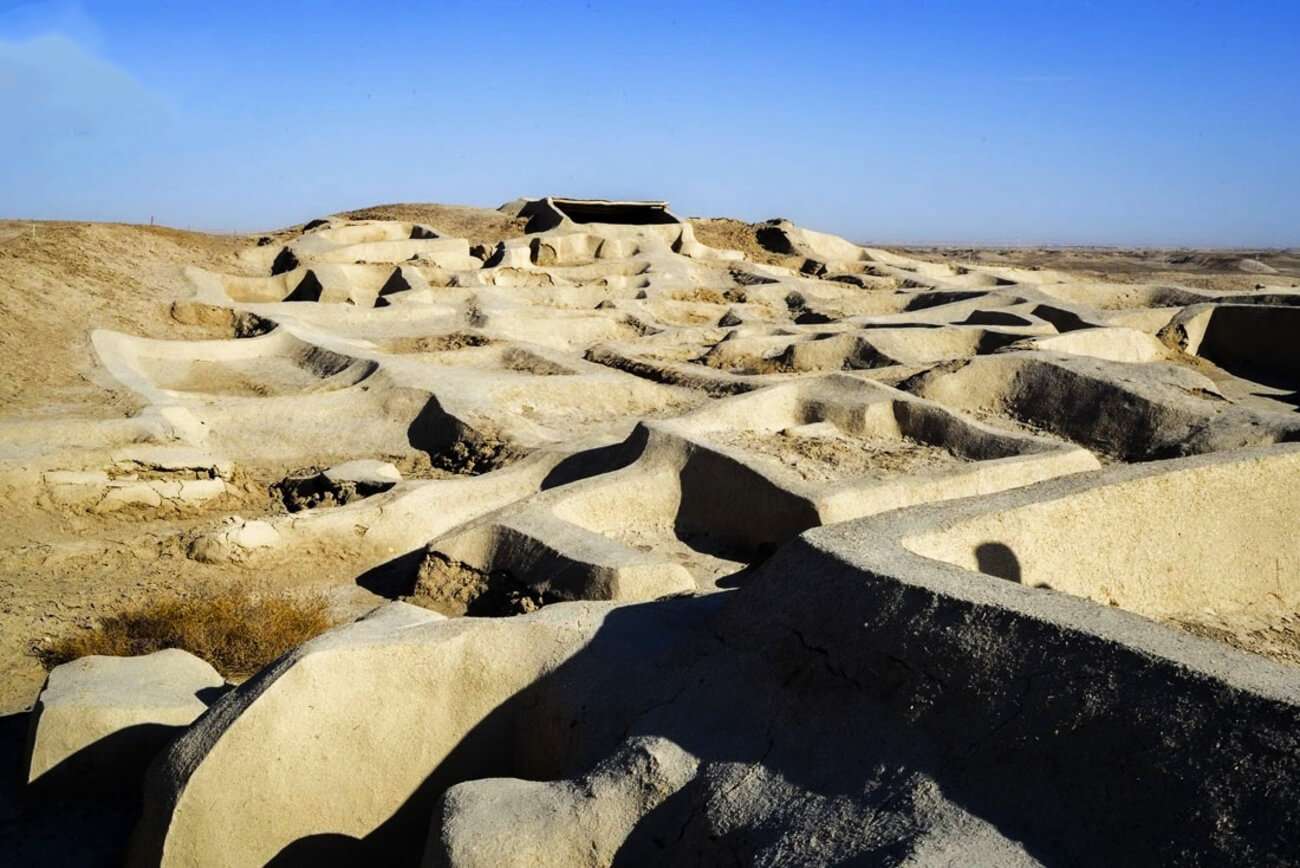 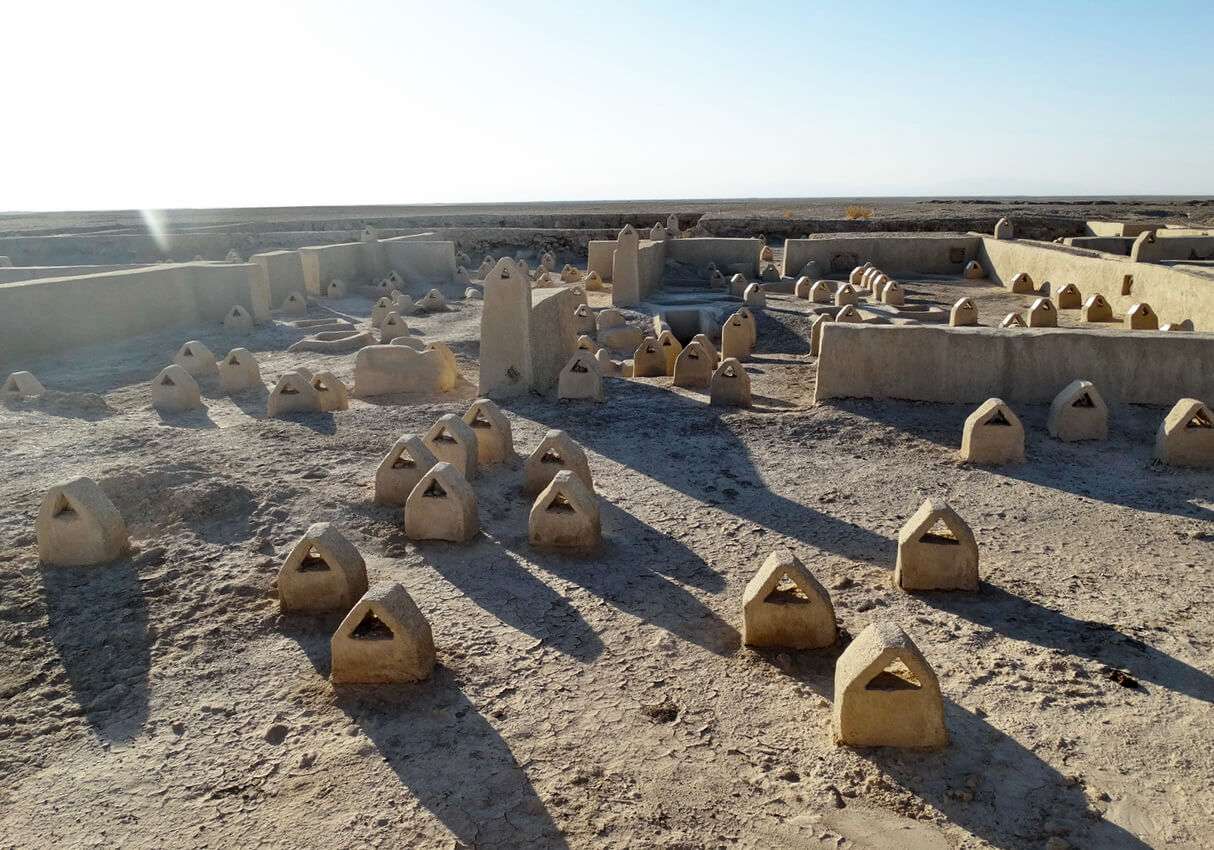 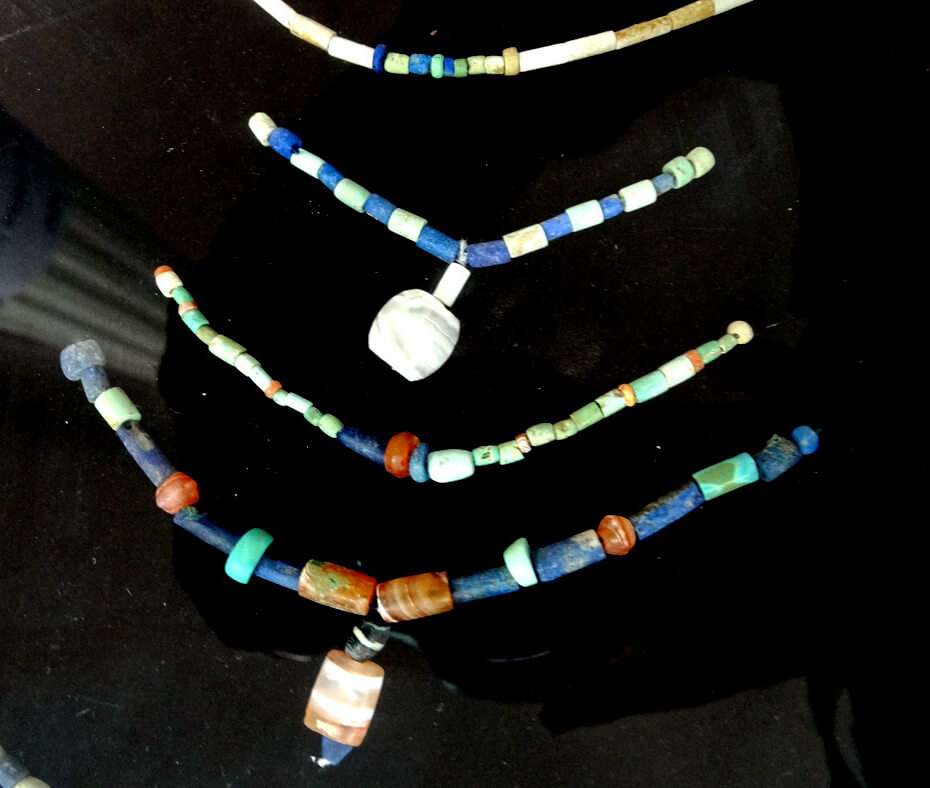 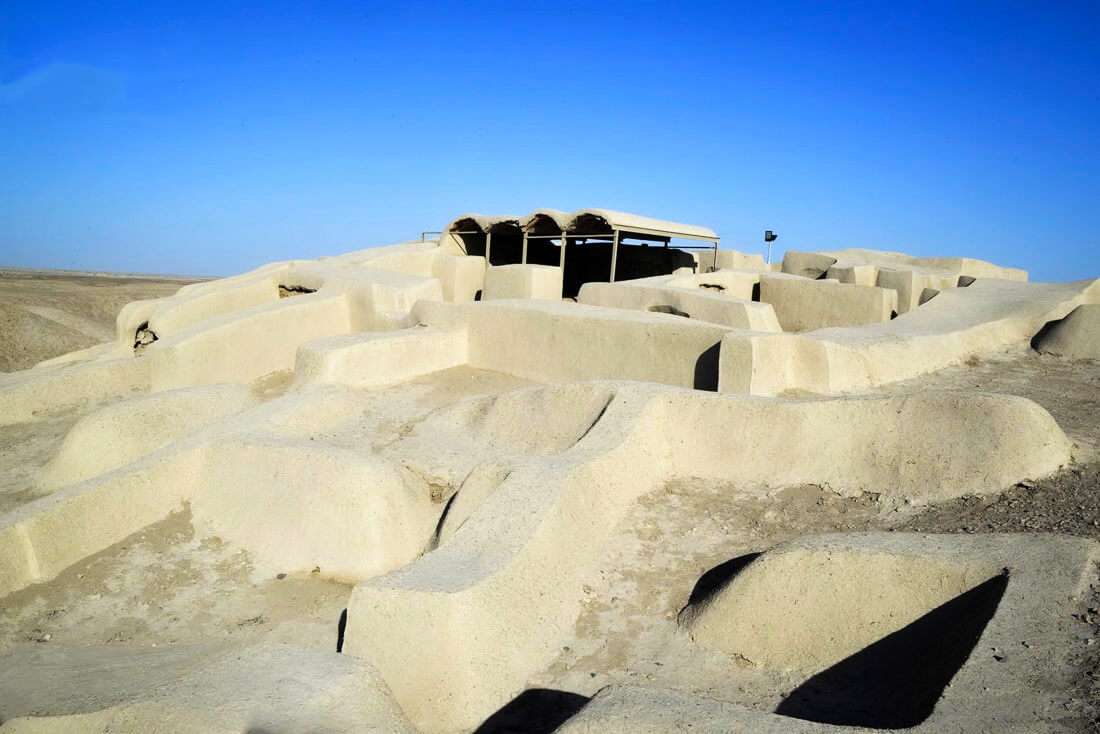 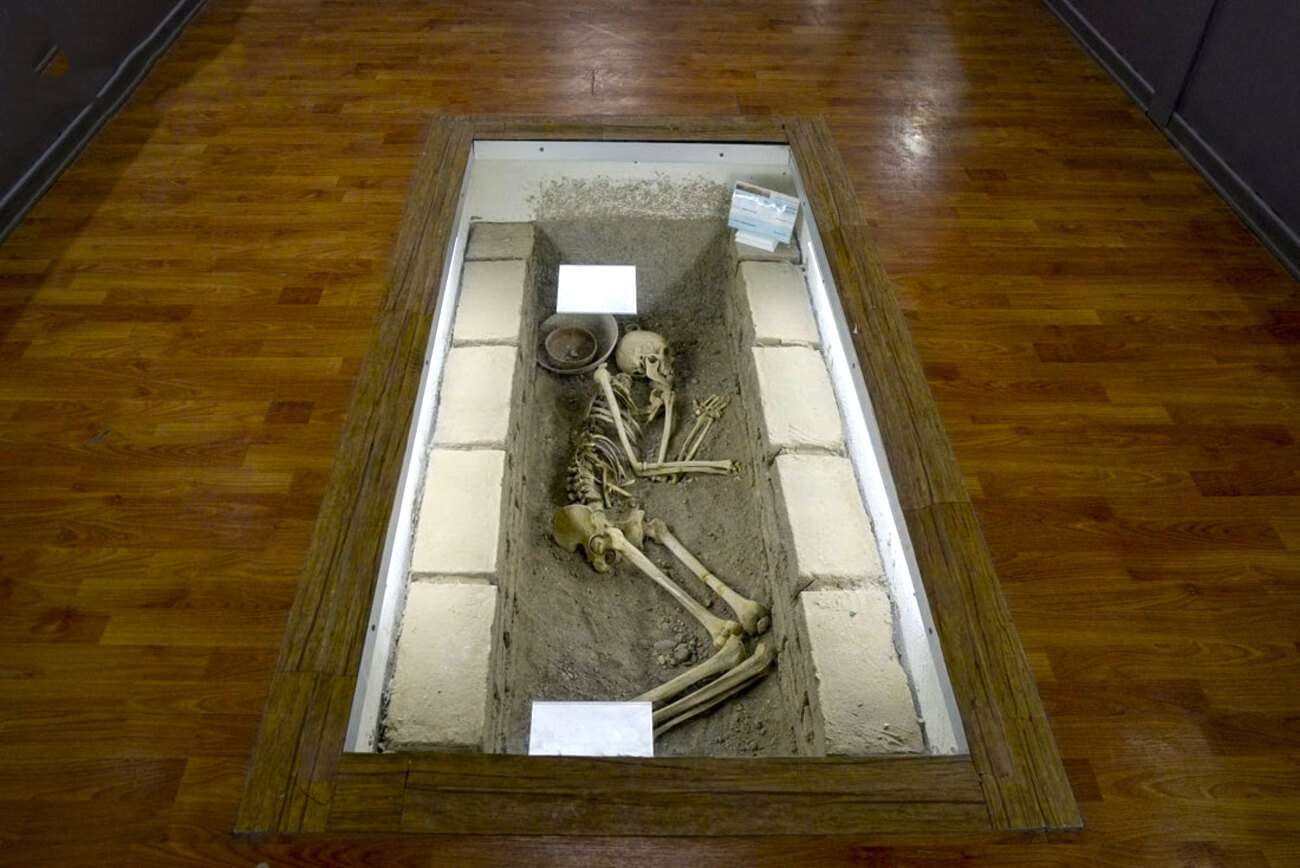 Behind the ocher veil of south-eastern deserts of Iran, the remains of a wonderful civilization call you to visit one of the oldest centers of human civilization. About 56 km from Zabol, the UNESCO World Heritage Site of Shahr-i Sokhta (Shahr-e Sūkhteh) makes a scene for casting new glimpses into the history of human civilization. Shahr-e Sukhteh (literally burnt city) is a remnant of an ancient adobe city, dating back to 3200 B.C. It was developed and expanded in an area around Helmand River, near Hamun Lake, on top of a chain of mounds. Up to 1800 B.C, when it became abandoned forever, the city had led a flourishing life for four eras. There is no evidence about what the city was called in the ancient eras, but Hansman believed that the city could be Aratta, a Persian city mentioned in the Sumerian epics. Being located on the trade routes of Bronze Age, and thus having vast cultural and trade relations with its whole surrounding region, from Indus Valley to the southwest of Iran and the southern shores of Persian Gulf and Oman Sea, made the Burnt City a very special one in the history of human development, rejecting the idea of Mesopotamia being the only center of human civilization.

The 151 hectare city includes four main parts: a residential area, an industrial zone, a monumental area and a burial ground. Researchers believe that the city may have been abandoned due to drought and changes in nearby water courses, not as a result of the fire. However, when you walk through the alleys of the city, you can see the traces of ash on the monuments around you. It is said that this ash originated from the kilns, used for baking pottery in the industrial centers of the city. The first excavations in the Shahr-e Sukhteh were reported from the Qajar era, after being visited by a British military officer who labeled it as the “burnt city.” Since then, many excavation projects have been done in the area, including a project by Italian archaeologists from 1967 to 1979. After the Islamic Revolution, the excavations were continued by Iranian researchers. As a result of these excavations, unbelievable wonders have come to light in this ancient city. The lucky point is that many of these objects are well-preserved due to the available salt in the underground layers of the desert land in which the Burnt City is located. For example, one part of the city is covered with numerous pieces of pottery debris, revealing highly valuable information about the achievements of its ancient residents. According to some researches, the southern wing of the city included the trade platforms for exporting lapis lazuli artefacts to the southern shores of Persian Gulf and Mesopotamia. The remains of ancient industrial and residential buildings, artefacts, and burial grounds found in the archaeological excavations bear testimony to a thriving city in the third millennia B.C. in the early ages of urbanization. Here, we describe some of the most awe-inspiring ones to help you get a better insight into human achievements made about 5000 years ago.

The excavations in Shahr-e Sukhteh, from the point of Chronology, include four eras and ten layers. the first era includes three cultural layers (8th, 9th and 10th layers) and was continued to around 2800 B.C. The second era (2800-2500 B.C) includes the 5th, 6th and 7th layers which can be considered as the heyday of Shahr-e Sukhteh. The oldest items are found in the eastern residential area, dating back to 3200 B.C, when the first settlements occurred in the city. The decline of the city dates back to the third era (2500-2300) and consists of the 3rd and 4th layers. The items remaining from that era include potteries, painted with black colored motifs. The latest era of settlement in Shahr-e Sukhteh occurs during the years 2100 to 1750 B.C. The ruins of the so called “Burnt Palace” is one of the relics of the last era. The 1st and 2nd layers are categorized in the fourth or the latest era of settlement.

Materially, the discovered artifacts in Shahr-e Sukhteh are made of stone, metal, bone, wood, and clay. They are divided into 5 categories: home crafts like pottery vessels; ritual and religious crafts like human and animal statues made of clay and stone; weapons such as slingers; trade tools like calculators, and clay, stone and metal seals and dices.

Decorative objects used to be made of imported semi-precious stones like turquoise, lazuli, and opal. Artisans of the city used to cut and shape the imported gemstones and export them to other cities.

Seals are one of the most important discoveries in the city. Most of them were square in shape and marked with animal and bird motifs. The oldest found seal, dating back to 3200 B.C., is a clay tablet bearing a short early Elamite text.

The clay statues are divided into two groups of males and females. Men are mostly standing, with open arms extended forward, while female statues mainly occupy sitting positions. One exquisite example of male statues is the statue of a tall man in a long cloak who bears a spiritual look.

A great volume of fabrics, ropes, and straw mats were found during the excavations in Shahr-e Sukhteh. The fabrics found in the Monumental Building are less damaged compared to those found in the graveyard. These fabrics mostly bear brown or crème hues, dyed with vegetal colors, and were woven by wooden, metal and clay spinning tools. These foundings prove the flourishing textile industry in the city.

Wooden objects are among the spectacular discoveries in Shahr-e Sukhteh, representing the unique skillfulness of its residents in carving woods and inlaying. The wooden objects found in the excavations include decorative objects, boxes, molds etc. Two broken wooden combs found in the Monumental Building, bearing intricate inlayed geometrical patterns, confess to the fact that the art of wood inlaying in Iran has its root in ancient times.

The Symbolic Heritage of Shahr-e Sukhteh

Archaeological wonders in the ancient Shahr-e Sukhteh never cease. The excavations at this world heritage site are always accompanied by new peculiar findings. The followings are some of the most spectacular achievements in Shahr-e Sukhteh:

- In the remains of a mass grave in the burial ground of the city, researchers found a trepanned skull belonging to a 12 to 14-year old girl which appears to be the first example of cranial surgery in history dating back to 2800 B.C. The girl seems to have survived for 6 to 12 months after the surgery, as the skull indicates.

- The earliest prosthetic eyeball is also among the discoveries in Shahr-e Sukhteh. It’s believed to have been worn by a woman in her left eye socket. The 6.9-gram eyeball is made of tar adorned with gold. It dates back to the 8-9 phases of settlement around 2900 B.C.

- You may think of animation as an invention of modern world. But, this idea was rejected years ago, after the Italian team discovered a remarkable object in the so called Burnt City in the 1970s. They found a clay stemmed bowl featuring a sequential drawing of a goat beside a tree. As the bowl spins, you can see the brown-hued goat on a crème background jumping to snatch the leaves of the tree. This spectacular item is kept in the National Museum of Iran.

- Probably playing board games is as old as the history itself. This is confirmed by an ancient backgammon board found in the ruins of Shahr-e Sukhteh. The game was played in this city around 3000 B.C. and is similar to the Royal Game of Ur. The board includes a smaller part with 6 points from which the game is started and the main board which consists of 12 points. It is a 33.4 * 12.7 * 6 cm board made of ebony wood of a 60-year old tree. The game has 4 cube dices numbered from 1 to 4.

- A most recent finding in the city includes a trash pit which is 3 meters deep and 2.5 meters wide. The pit contained plenty of pottery debris, including clay statues and vessels.

Most of these findings are at display in the museum nearby.

The Architectural Heritage of Shahr-e Sukhteh

The burial ground of Shahr-e Sukhteh is considered a valuable source of information which shed light on the customs of its residents around 5000 years ago. The graveyard has more than 4000 graves, most of them are yet to be explored. However, the explored ones show that the shape of the graves is not related to the age or gender of the owner, but his/her social statues or occupation. Actually, the number and quality of items buried beside the cadaver and also the architecture of the grave itself show the social status of the owner of the grave. Accordingly, the graves belonging to the poor and children usually have one or two pieces of pottery.

Architecturally, there are 10 types of graves and tombs in Shahr-e Sukhteh:

- The simple graves without any regular geometric shapes;

- Two-part circular graves. They are divided into two parts by a brick wall;

- Crypts, which are the most notable graves in Shahr-e Sukhteh. These crypts consist of two separate parts: an entrance pit and a burial chamber. The pits are usually of a depth of 120 cm and open to oval-shaped 180-cm- deep crypts. When a person was going to be buried, he or she, accompanied with votive items, was put in the crypt and then the entrance was blocked by the adobe bricks. The owners of these crypts were mostly among the elites;

- The crypt-like graves, which are relatively similar to the above-mentioned crypts. The only difference is that the entrance section is separated from the burial chamber by a wall;

- Circular graves with an entrance door;

- Circular graves without any entrance door (the door was blocked by bricks);

- And finally, bawl graves, which were the burial palace of the infants. Usually, the dead infant was placed in a large bawl and then was buried in the grave.

On the surface of the ground, there are traces of several huge buildings. One of them is called “the Monumental Building”. Although its original function is not clear yet, it was obviously a public building during the second era of settlement. In the third period, the building was turned to several small industrial workshops.

The fortified adobe walls are between 50 cm to 125 cm in diameter. The bricks are made by wooden molds in the standard dimensions of 12*20*40 cm. There is no evidence where the main entrance of the building was located. But, it is thought that the entrance was on the southern side of the building, where there was a large courtyard. A huge stairway with 8 steps in the courtyard led to the interior spaces. Interestingly, there is no direct pathway to access the back rooms or the flanking corridors and, to enter them, one had to pass through the front rooms to reach the back spaces. Now the only way to access the center of the building is through the No.2 stairway as numbered in the site.

Things To Do In Zabol